Motor Action Media interviews one of the most popular names in Jet Ski freeride – Zack Bright.

Motor Action Media: Zack, you’re definitely known in the sport for being one of the best, but tell us how you started out? What got you into the sport in the first place? 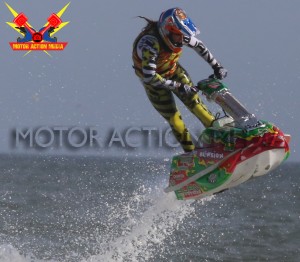 Well that’s a nice thing to say! I try very hard. I got into this sport after doing lots of other sports. Motocross, skate boarding, snow boarding, surfing. What I love is self-expression. I found having an engine in the surf allows you do new things that push the boundary between surfing and motocross. I loved the fact that I could try things that I dreamt of trying on my dirt bike with less chances of dying, plus being able to catch waves for days and not be stuck laying on a board for half the session. It was like all of my favorite sports rolled into one. I was hooked after my first time hitting the surf.

MAM: Can you remember the first time you ever did a back flip – how did that feel? How did you muster the guts to go through with it?

Absolutely! You can never forget that rush. The feeling of getting over your fear and trying something… You can’t explain it. To have the guts, you basically have to shut your brain off. Like, you make a switch in your head and turn off reality. You have to visualize it to try it. That feeling of fear, excitement, and adrenaline is what keeps you trying for the next move. The rush. Best feeling.

MAM: Have you made up any tricks of your own?

I have a trick I coined. It’s called the No-Can-Do Flip. It’s a No Handed Backflip with a Can-Can thrown in at the same time. Only one limp holding you to your ski. I successfully pulled that trick off in the Big Air event at the Blowsion Surf Slam and locked in 1st place with it. That’s a fun one.

MAM: Where is your favorite spot to ride? What’s awesome about it?

My local spot at Oceanside Harbor. The fact that you can roll up to the harbor and find Randy Laine, Ross Champion, Mike and Christian Young, Mark Gomez, Wes Krautkramer, Shaun Steele, Matt Smith, John Howe, Jame Crowe and his son Conner, my Brother Jake Bright, Brad Weiss, with the occasional Jerry Jones, Mike Serlin and Eddie Bettencourt thrown in? Sounds like that’s the spot to be!

MAM: I heard you’ve got a new ride that will debut at Daytona Freeride, could you tell me a little about it? 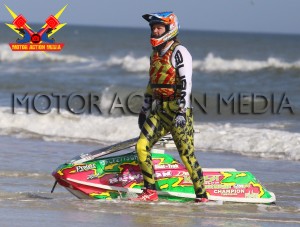 Yes I do! I can tell you that this will be the sickest boat I’ve been on. Krash-Industries new Predator Hull. It’s designed to be the best surf riding hull on the market. A lot of thought went into the development of the ski.  Custom Blowsion Paint, Blowsion Handle Pole, Dasa Powered SS 850 with 46’s, Cold-Fusion bits, a B-Pipe and a Billet 145 Skat-Trak Magnum Pump to put it all in the water with NO TRIM all being put together by the masterminds at Blowsion…. sounds like the best boat for the surf to me!

2014 is going to be a great year. Blowsion has stepped up big time supporting me 100%. My plans are to hit every freeride I can. Try and get around America a bit more. Hit every IFWA Tour Stop with hopes of taking the World Title. TONS of Filming projects. Basically world domination, do everything I can for my sponsors, and have fun along the way. Plus getting married!

MAM: Is there anyone in particular you’d like to thank?

I have to thank my Fiancée for all her support. My mom and dad and family. Blowsion, Dasa Racing, Cold-Fusion, Krash-Industries, Burn-Industries, Liquid-Militia, Hydro-Turf, Skat-Trak, Jet-Lift, Go-Pole, Fullgaz, Protect The Toyz, Ryno Power, Ross Champion for being my mentor, Everyone that has helped me through out my career. There are so many names i can list here you all are amazing and I thank you all so very much.